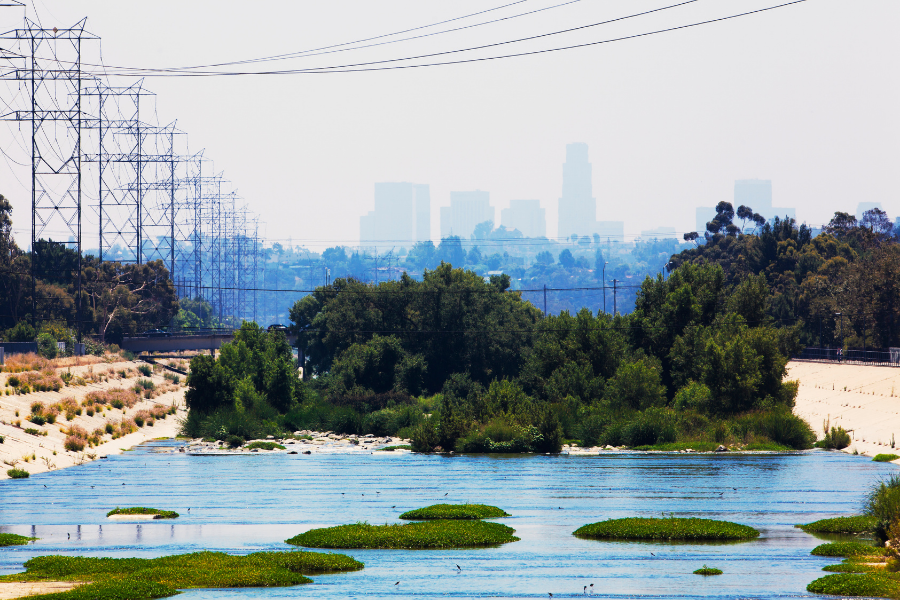 The work that the Californian city of Los Angeles is currently undertaking regarding the river that gave it its name is an example of how cities can rescue their relationship with natural spaces.

For decades, Los Angeles County leaders and residents have dreamed of restoring the 51-mile body of water which winds from the San Fernando Valley out to the ocean in Long Beach.

With the completion of a 480-page master plan commissioned by the Los Angeles County Board of Supervisors and funding from the state of California, along with local agencies for environmental restoration projects, the dream is becoming a reality.

Green projects designed to improve water quality and increase access to parks, while addressing social issues in surrounding communities, are among the goals of an updated master plan to revitalize the Los Angeles River.

It is the first effort of its kind in 25 years and uses research and data to identify community needs such as water quality improvement, housing, ecosystem care, park access, flood risk management and funding opportunities for projects adjacent to the river.

The situation in numbers

There are significant current and long-term projects, based on citizen participation through a representative survey of more than 600 residents, interviewed in four languages.

Fernando Guerra, Director of the Thomas and Dorothy Leavey Center for the Study of Los Angeles, at Loyola Marymount University, says, “Angelenos want to be outdoors. We have to do whatever we can for the future of the city.

It was he who led the aforementioned research. According to the results, 83% of Angelenos know that the river exists. 53% have visited the river at some point. Of them, 14% have visited it several times.

Those who visit the river engage in activities such as walking, relaxing, biking, bird watching, picnicking, fishing and kayaking.

The same poll showed that if there were more parks, natural areas and recreational facilities in the area, 85% of the surveyed people would be willing to visit it. However, 79% of them did not know that there is a revitalization plan. But 64% believe the river can become a world-class attraction.

Sarah Rascon, Mountains Conservation and Recreation Authority is born and raised in a Latino home where Spanish was spoken. She spent many years unaware the river was in her proximity. “We had no awareness that we were part of the environment, now this has become my passion,” declares.

In her first job she understood the history of the river. “Our ancestors took only what they needed.”

Her work is developing public open spaces and multipurpose projects. “We have a lot more to do, for example treating the water, the quality of which is assessed three times a week.” She adds that it is a navigable river.

Meanwhile Belén Bernal, executive director of Nature for All and former mayor of South Gate, represents a community that has been greatly affected by pollution and the lack of recreational spaces.

She also grew up with her family by the river, reason why she believes it is very important to look at history. She also stresses that we can learn to reimagine a space in need of change.

Belén believes children have been impacted by inaction. “I don’t want to think that there are children who are going to live 10 years less due to problems in a specific area.”

She sees a need to recognize leadership at the state and federal level does embrace conversations with residents. According to her, “They talk about needs and bring resources.”

Miguel Luna, president of the NGO Urban Semillas, is another spokesperson who grew up near the river and says that for him, “It’s about continuing to build a relationship that I formed with the river a long time ago. I think it has given me a lot. It’s like a friend, I want to give others the opportunity to reconnect and understand.”

Referring to his ancestors during times of slavery, he explains, “Nature was a way to escape a system that was not good for us.”

He works with 14 different jurisdictions with whom he created a working group in conjunction with non-profit organizations. There are 40 people working with him, and more than 100 have stepped forward to support this work.

“We have to consider housing, open space, homelessness, creating integrated economic development without generating displacement of people. All of this is in the master plan concepts,” he states.

Lastly, Damon Nagami, who is a Senior Attorney for the Natural Resources Defense Council, explains: “We want to bring in projects that exist in other cities.”

“There are disagreements”, he stresses, “because while some want a green and ecological river, others complain that there are worse problems in their communities.”

But for him there is an opportunity to achieve equitable development: “To incorporate the communities in the restoration processes, to prevent them from being disappointed. Fortunately, the surveys show us that the great majority wants to recover the river.”

Read the Article
PrevPreviousMother and Earth
NextSun’s heat can be a killer, but if harnessed, it can be a life-saverNext