World Wildlife Fund works in partnership with the Colombian government to protect and monitor 49.5 million acres of natural forest. The idea is to stop deforestation and to protect trees, which consume a massive amount of roughly one to two billion tons of carbon each year. A quick recap on why we need trees: The tissue fibers of trees require carbon to grow, and their carbon consumption removes carbon from the atmosphere. It is estimated that globally, forests consume one to two billion tons of carbon each year, which is a huge part of the estimated 10 billion tons of carbon produced by fossil fuels and other human-related activities.

So is it making a difference?

Scientists at the Carnegie Institution for Science at Stanford University, which has worked in conjunction with WWF, created high-resolution carbon maps for 165,000 square kilometers (64,000 square miles) of forest across roughly 40 percent of the Colombian Amazon. This effort has enabled Colombia to measure emissions from deforestation and forest degradation. You can see in the picture below, the areas where the most carbon is stored (in green) and areas of least carbon consumption and higher emissions (in red). The areas in red therefore, have no natural carbon stocks. 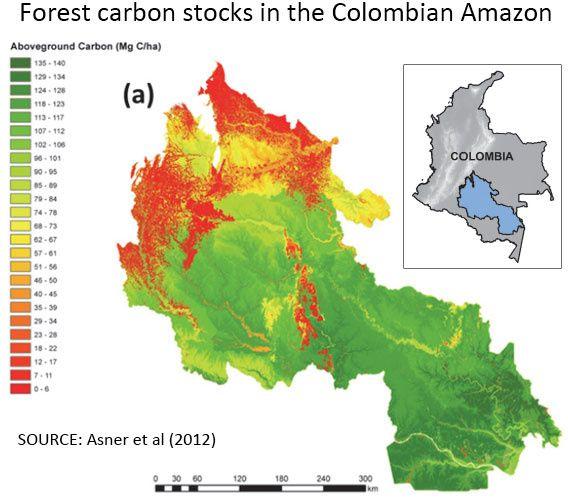 The research determined that forests in the project area (165,000 square kilometers currently being monitored) store 1.5 billion metric tons of carbon in their vegetation or roughly a sixth of the carbon dioxide that was emitted from fossil fuels in 2010. The results indicate the region is an important area for carbon storage, thereby keeping 1.5 billion metric tons of carbon out of the atmosphere. The image below illustrates the enormous difference between carbon emissions in protected areas and carbon emissions outside those areas. In the protected forest, 231,055,637.9 FEWER tons of carbon was emitted, due in part to fewer industrialized factories and to a greater number of carbon-consuming trees. 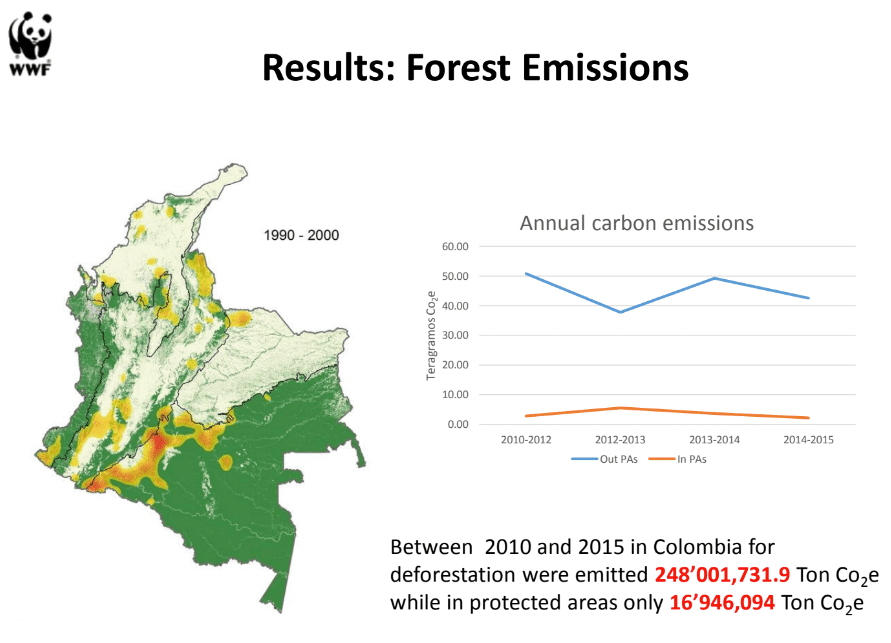 Dr. Greg Asner, whose work has been partially supported by WWF, said the next phase of the project will look at “[addressing] the challenges of climate change in Colombia and the western Amazon basin.” Because of the Protected Area Project led by WWF, it is likely we will see a continuation of the stabilization of millions of forested acres in Colombia. The map below depicts that projection. 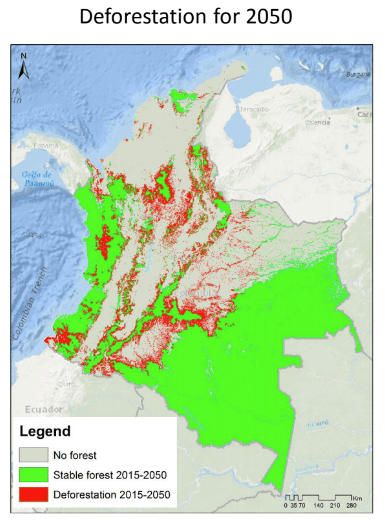